Lazio have identified Arsenal’s Lucas Torreira as one of the midfield targets, according to Tuesday’s edition of Corriere dello Sport.

The 25-year-old will return to the Emirates after completing a disappointing season on loan at Atlético Madrid.

However, he won’t be included in Mikel Arteta’s plans, which is why he’s been made available in the transfer market.

After his struggles with the La Liga winners, where he made only three league starts for Diego Simeone’s side and 16 more appearances from the bench, his valuation has dropped to €20m, which it’s €10m less than the money invested by Arsenal when they signed him in 2018.

In order to facilitate an exit, the north London club are ‘willing to sell’ the Uruguay international outright for ‘two instalments of €10m’. 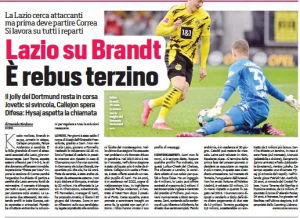 According to Corriere, the former Sampdoria man earns €3.5m net per season in England, but he would accept an annual salary of €3m plus bonuses to complete a switch to the Italian capital.

With Arsenal setting the conditions to conclude the deal and Torreira willing to take a pay cut, time should tell whether or not Lazio can get the deal over the line.