There was a time when Arsenal were at the forefront of the race to sign Paulo Dybala, and then it all went quiet.

Inter took the lead, and while the Serie A side remain the favourites to land him, there are a few doubts creeping in about the feasibility of the transfer following the agreement for Romelu Lukaku’s return.

That’s why Gazzetta dello Sport have a big double page spread on the situation on Friday, where they look at what could happen and what could have been.

Arsenal fall into the latter of the two, because it’s made very clear that the Emirates is no longer a destination he is attracted to. 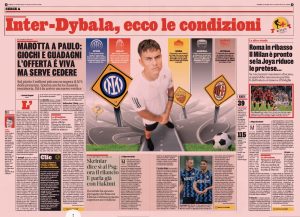 Gazzetta point out the Gunners were ‘the foreign club that sought Paulo most insistently, but everything collapsed with the failure to qualify for the Champions League’.

Arsenal were even a ‘welcome destination’ for the Argentine, and ‘would have had the means’ to give him the type of deal he wants, but their lack of elite European football, a must in his eyes, has ‘put out all the boil’ from the operation.

Perhaps if he starts getting desperate, a door could reopen…