In 2008 Arsenal made an offer for Cristian Zapata.

At the end of a big article about Jose Mourinho telephoning Leonardo Bonucci, Tuttosport say a ‘tornado’ is coming AC Milan’s way this summer, because there’s interest in Zapata from the London club.

Perhaps Arsenal found the Zapata file whilst clearing out Arsene Wenger’s office and decided to give it a whirl for old times’ sake.

Tuttosport say the Colombian is on the club’s list of possible reinforcements for central defence, and then there’s nothing else added. 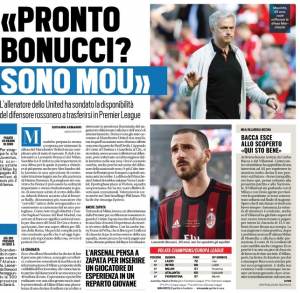 Zapata is now 31 years of age and has started 15 matches for Milan this season.

The claims are very strange indeed, and perhaps Turin newspaper Tuttosport are trying to stir the pot at AC Milan by sending Bonucci to Manchester United and Zapata to Arsenal.