On Tuesday we covered a couple of articles from Spanish newspapers which disagreed with each other over Barcelona and Cesar Azpilicueta. Sport felt that Chelsea signing Antonio Rudiger opened the door for an Azpilicueta exit, and that he could be a good alternative to Arsenal’s Hector Bellerin.

AS disagreed with them, claiming that Azpilicueta hadn’t been scouted by Barcelona over the past year, that all the interest was therefore old, and there wasn’t anything especially new pushing the potential transfer forward.

Marca have their own take on Wednesday, and explain the failure to get Bellerin from 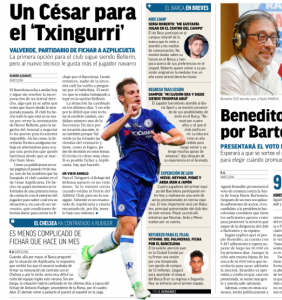 Arsenal could lead to a big assault for Azpilicueta.

Barcelona manager Ernesto Valverde is said to be clear, if Bellerin is a no-go and it is ‘possible’ to sign the Chelsea player then: “It must be done.”

There’s every chance Barcelona will find Chelsea just as difficult to deal with as Arsenal, and the Spanish club could once again be looking for an alternative right-back.