On Monday, we relayed claims made in Spain that Liverpool have set their sights on Guido Rodríguez.

The Real Betis man has been on the agenda of Arsenal and Marseille and it’s highlighted in today’s edition of ABC Sevilla.

After enjoying regular minutes with the La Liga side last season, the midfielder was part of the Argentina squad that won the Copa América last month.

It’s claimed the 27-year-old has been one of the Spanish club’s players that’s been ‘sounded the most’, to be their ‘important sale’ this summer.

The South American has ‘attracted the attention’ of the the Gunners and the Ligue 1 side, and these two clubs have ‘tested’ Real Betis, but without making a formal offer. That’s because Manuel Pellegrini’s side are firm with their stance.

Even though the player has €80m release clause, Real Betis ‘would be willing to negotiate’ a lower price. 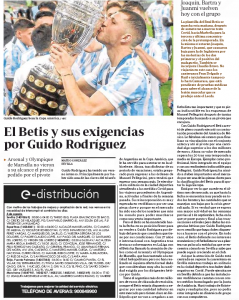 However, they will not ‘give away’ their important asset for a cheaper price.

Although the report doesn’t specify the price tag set by Los Verdiblancos [market value €20m plus] it’s explained that both Arsenal and Marseille consider the fee demanded by Pellegrini’s side to be ‘very high’.

To sum it up, the demands made by Real Betis make it difficult for suitors like Arsenal and Marseille to get hold of Rodríguez and any deal remains difficult as the Spanish side remain firm in their stance.