Arsenal are one of several clubs interested in Paris Saint Germain full-back Thomas Meunier this summer after Unai Emery tried to sign him last year.

The Belgian is set to leave PSG on a free transfer when his contract expires and has several clubs all keen on his signature.

He has been heavily linked with a move to Borussia Dortmund, with former PSG man Jérôme Rothen claiming yesterday that he had already signed a deal with the German club.

Het Laatste Nieuws refute that today, though. While they back up the claim that Dortmund are interested, they explain that Meunier is yet to decide his future and ‘all options are open’ for him at this moment in time.

Arsenal are one such option according to his entourage, with former Arsenal boss Emery having attempted, and failed, to take Meunier to the Emirates last summer.

They could revive that interest this year as Mikel Arteta overhauls the squad he inherited from his fellow Spaniard. 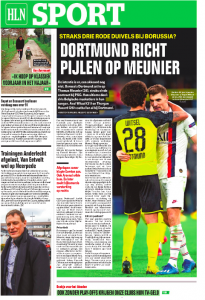 The right-back position is not one of particular weakness for the Gunners, as they have Héctor Bellerín, Cédric Soares and Ainsley Maitland-Niles who can all play there.

With Bellerín and Soares both suffering from injury problems, though, and Maitland-Niles better suited in a more advanced role, perhaps Arteta would look at the experienced Meunier as an ideal man to fill in, particularly on a free transfer.