Earlier on Monday, we covered a report that Arsenal could be a landing spot for Aaron Ramsey, currently on his way out from Juventus.

The Welshman’s return to the Emirates would certainly be an interesting one, and yet other targets appear alongside him as Mikel Arteta looks to revamp his midfield.

One of the names thrown into the ring by Gazzetta dello Sport is Marcel Sabitzer, more often than not linked with a transfer to north London rivals Tottenham these days.

The Italian newspaper claim the Austria international has ended up ‘in the sights’ of the Gunners, as the club undergo a ‘half-revolution’ this summer. 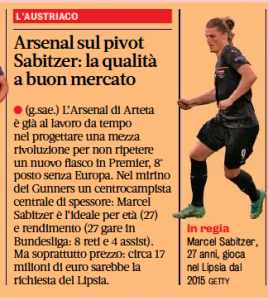 That’s because the German club, likely fearful of losing him on a free next summer when his current deal expires, are asking for €17m, which is affordable even for a not-entirely-cash-strapped-but-also-not-exactly-rich Arsenal in the upcoming transfer window.

Certainly one we’ll keep an eye on, as confirmation from Germany for this would make it far more interesting.