Arsenal have been trying to negotiate with Sevilla to lower Steven Nzonzi’s transfer fee as they’re not willing to meet his €40m release clause, France Football reported on July 23rd.

On July 24th, Foot Mercato claimed the path taking him to the north London club is the ‘most serious’, where Unai Emery is ‘dreaming’ of a reunion with his former player.

Today’s edition of Mundo Deportivo claims the Premier League club are still ‘after’ the World Cup winner with France, stating: ‘The Arsenal are after him’

Ernesto Valverde’s side are not willing to wait until the end of the transfer window for Paris Saint-Germai’s Adrien Rabiot. If they struggle to sign him, they could then shift the focus on Nzonzi, who wants to leave Sevilla this summer.

If the Spanish champions move to sign the 29-year-old, they don’t have to negotiate with Sevilla if they pay his release clause. 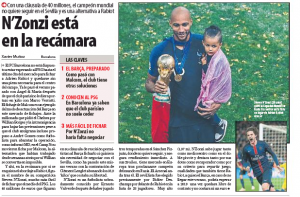 It should be seen whether Arsenal are ready to meet Nzonzi’s release clause or if they shift their focus elsewhere in the market if Barcelona decide to make an approach for the player.

Rabiot may see Nzonzi snatch his Barcelona transfer, just like he took his World Cup place. It’s up to Arsenal to stop that.