There’s a big campaign going on in Portugal so Yacine Brahimi can finally be sold by Porto. Several local newspapers have reported his interest in leaving for the Premier League this week, although none of the stories made clear which English club would want him.

But there’s always one to be the first, and Correio da Manhã have shown up saying Arsenal are the club who have shown the strongest interest in the player.

Arsenal, however, are far from meeting Porto’s demands. The Dragons are willing to sell him for €40m, since half of it goes to a third-party company, so they can get a €20m fee. 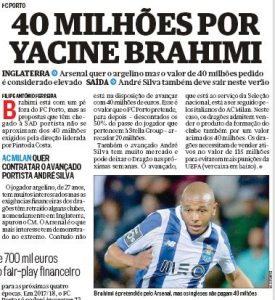 Brahimi has been flirting with a move out of Porto for a while now, and was even training separately from the squad at the start of the season, when his departure seemed imminent.

But after staying, the 27 year old had a very good season, and with seven goals and four assists.

Porto need to sell, Brahimi is one of the chosen ones, and maybe Arsenal can take advantage.