It feels like Daniele Rugani has been waiting to be a first choice at Juventus for much of his career. There’s been plenty of interest in the 24 year old from the Premier League, with Arsenal and Chelsea leading the charge.

Back in 2015, Arsenal were said to have made an offer for the player, and a source close to Rugani told Sport Witness: “Of course, if Arsenal or other important English clubs want to buy him with the right offer, the player will be more than happy to move.

“He has the skill, physique and perfect attitude for the Premier League and will be very happy to play in the United Kingdom for top English teams.”

Then in 2018, the player’s agent Davide Torchia told the Italian media: “Daniele is doing well, he’s happy. Arsenal? They didn’t make an offer, but they did show their interest. We respect Juventus.”

In May of this this year, the same agent spoke again, and said his client had rejected the chance of joining the Gunners.

Now Arsenal are back.

Wednesday’s edition of Gazzetta dello Sport reports the London club have ‘set their sights’ on Rugani and offered a two year loan deal. Juventus have knocked it back, believing they need the cover, however, it’s suggested a return is possible from Arsenal. 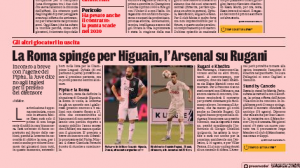 The Italian newspaper even say Unai Emery’s side could ‘return to the office by entering the purchase of Khedira in the package.’

That doesn’t say a lot for what Juve think of Sami Khedira, given the suggestion Arsenal taking him could lead them closer to Rugani.