On Sunday, Sky Sports had an article saying Everton are in talks to sign Yacine Brahimi from Porto. The story said the negotiations are going well, although the player preferred a club with Champions League football.

Both O Jogo and Record, Portuguese newspaper, quoted the article, but A Bola did something different. They claimed the Everton interest, without giving Sky the credits, and said Arsenal are after the player too. 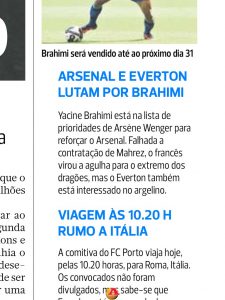 According to A Bola, Brahimi is on Arsene Wenger’s priority list, especially after Arsenal missed out on signing Riyad Mahrez from Leicester City.

There’s no doubt that no matter what Brahimi’s destination is, Porto want to sell him before August 31. The player has been training separately from his teammates and is not part of the club’s plans for this season.

It’s just a bit weird that a big club like Arsenal allegedly come after a player and all A Bola could do was to barely write one paragraph about it.

We all know how the Portuguese press is, and if they really had this exclusive information, we bet it would become something much bigger in the newspaper.

There’s time for that.