Arsenal are continually discussed as the next destination for Atlético Madrid midfielder Thomas Partey.

The Ghana international’s current contract with the La Liga side expires in 2023, and he has a release clause of €50m in his contract.

Diego Simeone’s side have trying to tie down the 27-year-old to a new deal, so they can increase his asking price.

Friday’s edition of AS explains Los Rojiblancos’ squad for next season will ‘practically be the same as now’, barring a few changes. They have to find a solution for Thomas and sell one of the right-backs.

The newspaper explains Atlético are facing a ‘big dilemma’ with the midfielder’s future beyond this season.

He’s had a renewal offer for three months and if he agrees to sign a new contract, the player can triple his wages. However, the defensive midfielder has not yet committed his future to the club.

Mikel Arteta’s side get a mention and the report states Arsenal seem ‘ready to take’ him this summer. 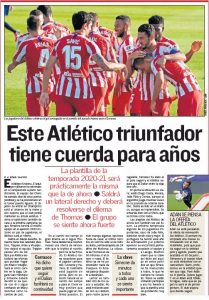 AS add Atlético will only let Thomas leave if any suitors (including the Gunners) pay his €50m release clause.

The Spanish side have made it clear it’s ‘money or nothing’ and they will not entertain any sort of exchange deal for Thomas.