After Arsenal’s win over West Ham United on Sunday, Mikel Arteta stressed the “market can surprise us” when discussing the club’s potential incomings and outgoings in the last few days of the transfer window.

“Well, depending on what happens with some other players… As I say again, we are open to discussions, the market can surprise us. [Teams] can come for any of our players in different positions and we have to react, like it happened with Emi. So let’s see what happens,” he said.

Atlético Madrid’s Thomas Partey is one of the midfielders linked to the north London club.

According to Mundo Deportivo, the La Liga side have identified Lucas Torreira as a target, while the Gunners have put the name of the Ghana international on the table.

Thomas has a €50m release clause and Los Rojiblancos are referring to his termination clause to all suitors who are interested in signing him.

Another report from the same newspaper focuses on Atlético’s interest in Torreira. The Uruguayan is not included in Arteta’s plans, and Diego Simeone wants to train him at Wanda Metropolitano.

It’s claimed the Spanish side’s manager spoke to the Arsenal player over the phone to ‘communicate the importance of his place’ in his new project at the club.

Torreira is ‘crazy’ to join Atlético, and has set aside offers he has from Fiorentina and Torino.

Atlético have already started talks with the Gunners to sign the South American on loan with purchase option. The operation remains complex due to the stance taken by the Premier League club.

Arsenal are not ready to compromise on the formula proposed for the midfielder’s transfer, especially when Simeone’s side have not made it easy for them to sign Thomas.

Mundo states there’s optimism from Torreira’s environment that there will be ‘resolution’ in this matter.

AS also discussed Atlético’s interest in Torreira, and state he doesn’t have a good relationship with Arteta. 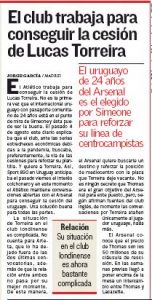 Arsenal, who want to find a new club for the player, will try to strengthen their own midfield, if Torreira leaves the club.