Despite Inter’s pursuit of Nahitan Nández, the Italian side haven’t given up on Hector Bellerin for their right-back role.

Targeting the Arsenal man to replace Achraf Hakimi, who was sold to Paris Saint-Germain for a fee in excess of €60m, the Serie A club have been in talks with the Gunners regarding a potential loan.

Arsenal, as shown by their long talks with AS Roma for Granit Xhaka, have been tough in their negotiations, however, refusing to budge from their demands of a straight sale or a temporary deal with an obligation to buy.

Inter, down their end, want a simple right to buy, which is why Bellerin’s agent is ‘expected in Milan in the next few days’, with logic stating he will sit down with the Italians to try and hash something out, according to Gazzetta dello Sport. 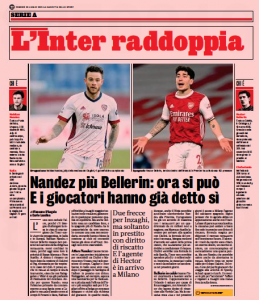 The Arsenal man remains a ‘hot name’ for Simone Inzaghi and co. on the transfer market this summer, and negotiations ‘remain alive’ for everyone to find a deal that suits them.

Whether that comes in the next few days remains to be seen, but as the Gunners have shown previously, they are willing to wait others out in order to get what they want this trnasfer window.