Torino failed in their efforts to sign Lucas Torreira during the last window as the Arsenal player ended up joining Atlético Madrid on a loan deal.

The midfielder’s decision to join the La Liga side has seen him make seven appearances in all competitions, which includes two starts.

On November 13th, Tuttosport reported the Turin club’s director ‘will contact’ the 24-year-old’s entourage to find out if he still retains an interest in joining them.

Today’s edition of the same newspaper has another report on the Uruguay international.

According to the report, the Gunners owned midfielder ‘will ask to leave’ the Spanish side if he’s not getting enough playing time, in order to avoid risking a place in the national team.

It’s claimed both Arsenal and Atlético will ‘discuss and analyse’ the former Sampdoria man’s request to leave Los Rojiblancos.

This brings Torino back into the picture, and they’ve decided to invest in a new midfielder in January. Tuttosport states ‘Now or never’ for the Italian side with regards to signing the South American.

Torreira played under Torino manager Marco Giampaolo at Sampdoria and the latter really ‘appreciates’ the midfielder, who ‘got lost’ in London and Madrid.

With only one win in nine league matches and sitting 18th in the table, Giampaolo’s position could be under threat. Even if the coach is sacked, Il Toro will still be looking to invest in the centre of the pitch and Torreira ‘remains the hottest’ target.

Tuttosport have found out the Arsenal player would ‘enthusiastically accept’ the transfer to Torino, where he will have opportunities to play regularly and be placed in the centre of their project.

Mikel Arteta’s side, for their part, could sanction another loan deal for Torreira until the end of the season in order to ‘safeguard’ his valuation. The newspaper further adds Simeone, who cannot assure regular minutes, would not oppose the Uruguayan’s transfer.

Torino chairman Urbano Cairo is looking at a loan deal with obligation to buy in order to convince the FA Cup winners. However, it will be for a lower figure when compared to the demands made by Arsenal in the summer. 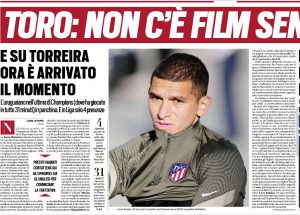 The negotiations could start in the next few days, but first Torino will have to contact Torreira’s entourage and then the two clubs.