There’s been a lot of talk regarding Lucas Torreira and a potential exit from Atlético Madrid in January, but the fact the Arsenal midfielder is currently tied in a loan makes things complicated.

Brought in to provide some squad depth for Diego Simeone’s side, the Uruguayan hasn’t been given too many opportunities to shine this season, and there have been claims the Gunners feel La Liga side are purposefully trying to ruin his value as revenge for the Thomas Partey deal.

We highly doubt that’s the case, but either way, finding Torreira a new club should be a priority in January, and Fiorentina are very interested.

They already were in the summer, and Corriere dello Sport on Friday claim the midfielder remains Cesare Prandelli’s ‘dream’ to bolster that area of the pitch.

It’s made clear this ‘isn’t a simple operation’ and one that ‘will need to monitored with attention’. 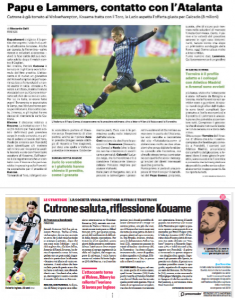 La Nazione, however, believe things have gone much further than their counterparts, stating ‘contacts with Atlético Madrid and Arsenal have started’, with Fiorentina ‘convinced the triangulation is possible even without overly heavy financial outlays’.

They then finish by saying ‘they will talk about it some more on Monday’.

Let’s wait and see what Tuesday’s papers bring, then.