With the future of Boubacar Kamara up in the air, Marseille are having to plan for a few scenarios.

The defensive midfielder only has one year left on his contract, and with big teams circling, the Ligue 1 club are looking around Europe to bolster their midfield, with one name cropping up in La Provence: Arsenal’s Mattéo Guendouzi.

It’s made clear that the interest in the Gunners man isn’t necessarily linked to Kamara leaving, and also pointed out that the Hertha BSC loanee is currently recovering from a fractured metatarsal that will see him be out of action for the next three months.

That being said, La Provence explain ‘isn’t indifferent to the prospect of joining Marseille’, as he knows he needs to ‘leave London this summer’, where Mikel Arteta is no longer counting on him. 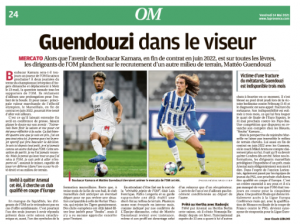 The local newspaper state those in charge at the Ligue 1 side ‘prefer the hypothesis of a loan’, but ‘Arsenal will obviously have something to say about it’.

Guendouzi would like his next club to be qualified for a European tournament, which is ‘critical’ for him, and is fully aware that Marseille are still in the battle for the fifth spot in the league.

One to keep an eye on, as a return to France might just be what the 22-year-old needs at this stage in his career.