Arsenal’s Alexandre Lacazette is one of the favourite striker targets for Atlético Madrid, according to AS.

The La Liga side were following the 29-year-old even before he joined the Gunners in 2017.

The former Lyon star, for his part, is ‘delighted’ with Los Rojiblancos’ interest, and has made Diego Simeone’s side his first choice club, ahead of other options.

Those close to Lacazette are of the belief the ‘transfer will finally be viable’ because the Arsenal forward will also play a part in finding an agreement.

Mikel Arteta’s man wants to join Atlético ‘as soon as possible’, but AS state the negotiations between the two clubs ‘will not be easy’ because of his contract until 2022.

In addition to this, the Spanish side can only bring in a new striker once they manage to offload one of their attackers.

According to Cadena Ser, as relayed by AS, Espanyol’s Raúl de Tomás is another option for the Madrid club. 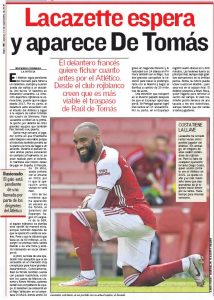 Espanyol, who were relegated from La Liga, want to get De Tomás off their books, and the Spaniard’s signing will be ‘more affordable’ for Atlético than Lacazette.

De Tomás (25) is younger than the Arsenal player, and has experience of playing in Spain. These factors, coupled with Atlético’s financial worries, may see them favour the Espanyol attacker over Lacazette.