Home Premier League Arsenal Arsenal have placed attacking duo ‘on the market’ – One of them...
SHARE

Barcelona are ‘attentive to the future’ of Arsenal’s Alexandre Lacazette and Pierre-Emerick Aubameyang, according to Sport.

Lionel Messi’s exit and Sergio Agüero’s injury has seen Ronald Koeman ask the La Liga side to strengthen the attacking division before the window closes.

The Blaugrana, who are monitoring the market, have the Gunners duo on their radar, and it’s said ‘one of the two could leave’, as long as there are ‘favourable economic conditions’.

However, Barca have warned Koeman no investments can be made before allowing certain players leave the club.

There can be movements if they manage to cut ties with Samuel Umtiti and Miralem Pjanić, and raise €14m from Martin Braithwaite’s sale.

Should this happen, the Catalan club could look to sign a new No.9, either via a free transfer, loan or through swap deals.

The exchange deal is something Mikel Arteta’s side would welcome, considering there are a few Barcelona players like Neto, Clément Lenglet and Philippe Coutinho, who could be of interest to the north London club. 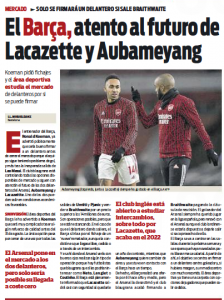 Lacazette’s contract expires in 2022 and Barca are ‘fully informed’ he will ‘certainly leave’ the Premier League side, while Aubameyang wants to leave Arsenal and ‘was in contact’ with the La Liga side ‘some time ago’.

Sport say Arsenal have put Lacazette and Aubameyang ‘on the market’, and are ‘open to studying’ swap deals involving the Frenchman, since he has less than a year left on his contract.