Arsenal are ‘strongly engaged’ in trying to sign Rafa Silva from Benfica, according to claims from Portugal today.

Newspaper Correio da Manhã says the Eagles are already aware of the interest from the Gunners, and won’t make his departure easy.

Rafa Silva is currently protected by a release clause of €80m, and that leaves the Lisbon side with a good margin to negotiate.

The report says the player sees a move to the London side ‘with good eyes’, since this is the time he could achieve the best contract of his life. However, he’s said to be focused on finishing the league with Benfica and winning one more title for the club. 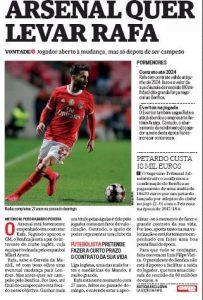 Interestingly, most of the story is more about Rafa’s reaction to the interest than Arsenal’s efforts to sign him. It’s not made clear if talks have been initiated.

Rafa Silva has been linked to Premier League sides for the past five years, with several clubs being said to want him.

The winger has nine goals and six assists in 25 appearances for the Eagles this season.