Arsenal are interested in RB Leipzig midfielder Christopher Nkunku, who could end up costing at least €40m.

That’s according to SportBILD, who say the Gunners ‘are dealing’ with the player ahead of a potential transfer.

Nkunku has been a revelation for Leipzig since arriving in an £11.7m deal from Paris Saint Germain in 2019, with six goals and 19 assists in 55 games so far.

His form has seemingly not gone unnoticed around Europe, with Lyon putting him on their list as a replacement for Memphis Depay this summer.

The Dutchman, who was heavily linked with a move to Barcelona, did not end up leaving though and so a deal never happened.

Now Nkunku is ‘exciting for English clubs’, namely Arsenal, who SportBILD say are ‘dealing’ with the Frenchman.

What that means isn’t made clear, but it seems Leipzig want a big price for their man, with it stated that his asking price would be ‘at least €40m.’ 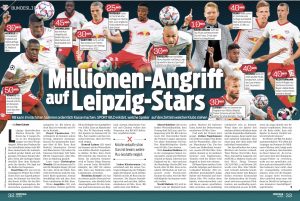 Arsenal’s willingness to pay such a price isn’t made clear, it’s very easy to assume they’d want to bring it down, but Leipzig have no need to move from it given Nkunku has a contract with the club until 2024.

It’s also not made clear whether Nkunku would be interested in a move to the Emirates, although it appears the interest is there from Arsenal at least and this rumour is one to keep an eye on moving forwards.