Pushed to one side by Arsenal and Mikel Arteta, it became very clear last summer that Lucas Torreira needed to find himself a new club.

The obvious move for the Uruguay international was a return to Italy, where he had already made a name for himself following his time at Sampdoria.

Fiorentina and Torino were among the interested parties, but neither could afford a direct transfer, meaning they preferred the loan option with a view to buy down the line.

Arsenal were reluctant to do that, rather waiting to see if they could get a different deal, but it never came, meaning they eventually had to let him go to Atlético Madrid for the season with an option to buy, with Thomas Partey going the other way.

Since then, however, Torreira has barely featured under Diego Simeone, totalling just 213 minutes of football, and there are already rumours of him leaving in January. 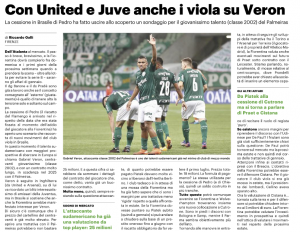 Torino have once again popped up as the favourites, with talks reportedly underway regarding a move, at least according to La Nazione.

The Florence local newspaper explain Fiorentina are ‘waiting to follow the developments of the negotiations between Torino and Arsenal’ regarding Torreira, suggesting strongly the interest is still there.

A register is needed, and he would fill that role ideally, needing little time to adapt to a league he already knows well.

Patience is key here, and that’s what Fiorentina are prepared to do.