Arsenal have been frequently linked with Thomas Partey.

The midfielder has a €50m release clause and Atlético Madrid have been trying to renew his contract for the past few months. As part of a renewal they would raise the clause, and therefore put the player’s future firmly in their hands.

Diego Simeone’s side were knocked out of the Champions League after their 2-1 defeat to RB Leipzig in the quarter-final. The Ghana international missed the tie due to an injury and he also missed last season’s knockout match against Juventus in Turin, where Atlético suffered a 3-0 defeat.

According to AS, the 27-year-old’s absence from the starting XI was noticeable.

The La Liga side missed him the most against Leipzig and Juve, and his absence proved he remains vital to Los Rojiblancos. There’s no ‘natural substitute’ for him in the club’s squad.

It’s claimed the Gunners continue spying on Partey, who is yet to sign a renewal. In addition to this, Mikel Arteta’s side are the ‘most insistent of suitors’ when it comes to clubs wanting to sign the player.

Last month, reports coming out of Ghana backed the midfielder to sign an extension with the Madrid based club.

Partey is 16th in the list of top earners at Atlético and AS add Simeone’s side are confident he will ‘end up accepting the contract renewal and improvement proposal.’ 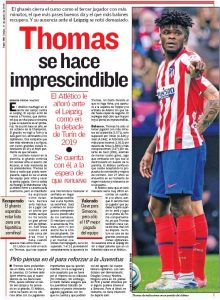 The Spanish side are aware it’s difficult to find a replacement for Partey in this market, and therefore, securing his future is ‘one of great concerns’ for Atlético.

AS only stress that Arsenal are the ‘most insistent’ of all the suitors for Partey. However, there’s no mention whether or not the north London club are ready to trigger his €50m release clause.