One of the priorities for Besiktas manager Sergen Yalcin is to keep Arsenal’s Mohamed Elneny at the club for next season, report Turkish newspaper Posta.

It’s stated Yalcin is very happy with the Egyptian’s performances and would like to keep him in his squad as he believes his role will become even bigger for the next campaign.

Elneny is reportedly enjoying life in Istanbul and has told the Besiktas board that he would take a wage cut to remain there. Posta also claim the 27 year old will speak with Arsenal’s board to make this transfer happen. 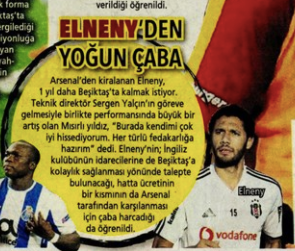 Besiktas will soon open talks with Arsenal for Elneny and there could be a possibility of reaching an agreement if the Gunners accept to pay a ‘certain’ percentage of the player’s wages.

The former Basel midfielder has made 28 appearances in all competitions for the Black Eagles this season. His contract with Arsenal will expire at the end of June 2022.