Unused by Mikel Arteta at Arsenal, William Saliba was loaned to Marseille for the season without an option to buy.

Already knowing Ligue 1 very well, the defender didn’t take long to adapt to his new surroundings, and, the odd blip aside, has been instrumental to his club’s form in the league.

The problem for Marseille is they know they will have to part ways with him at the end of the season, and that’s despite the player being keen to stay.

This comes according to La Provence on Tuesday, who state the defender, under contract at Arsenal until 2023, ‘is enjoying himself in Provence and loves the atmosphere within the group’. 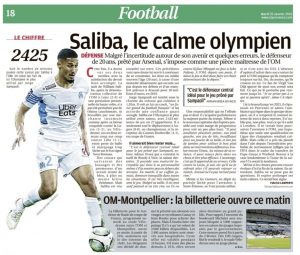 He also ‘hasn’t forgotten everything he suffered in London’ and ‘would see himself continue the OM adventure’, which would only be possible ‘with a qualification for the Champions League’.

The problem here is that, because of the mess caused by the Pape Gueye transfer, which saw the Ligue 1 club banned from recruiting for the time being, the ‘tendency’ now is for Saliba to return to London.

La Provence do make it clear ‘things can evolve between now and the end of the season’, but, in the meantime, Saliba ‘isn’t asking himself questions and hopes to extend his calm nights’.