Arsenal are insisting on the signing of Sporting winger Joelson Fernandes, according to claims from Portugal today.

Newspaper A Bola reports that after having a first bid turned down, the Gunners have made a second offer for the 17-year-old.

That first attempt was €20m. This time, the amount still didn’t get to the player’s €45m release clause, and was rejected again.

Arsenal are said to be ‘testing the patience’ of Sporting’s board. The Gunners know about Joelson’s release clause, but try to get a positive response as they’re aware of the Lions’ need for money. 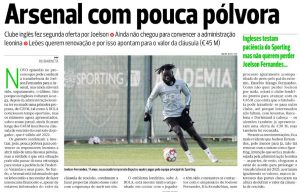 A Bola insists that Arsenal are very engaged in signing Joelson, and have been in ‘constant contact’ with his agent Kia Joorabchian.

In case the Gunners feel that the winger is about to move somewhere else, then they’d be ready to trigger his release clause and guarantee the signing.

Borussia Dortmund and Juventus are said to be the two other clubs in the race, as the German side have also offered €20m for the player.