Arsenal midfielder Lucas Torreira remains the name ‘at the top’ of Torino’s thinking, but they face a fight with Atlético Madrid for him.

Torreira has been widely linked with a move away from the Emirates this summer, repeatedly named on a list of players Mikel Arteta is willing to sell to raise funds.

Torino are among those thought to be keen and have been negotiating with Arsenal for several months about a potential deal, which would reunite the midfielder with his former Sampdoria coach Marco Giampaolo.

So far a deal hasn’t been agreed, but Tuttosport say he remains at the top of the Italian club’s thoughts.

They report that the midfielder’s farewell from Arsenal ‘seems to have been written’ by now as he is not in Arteta’s plans.

Torino are ‘working together’ with the Gunners on the formula of a potential operation, opening the discussions on a loan with a right to buy. They are, however, open to an ‘obligation’ to buy as well.

The player has already spoken to Giampaolo on the phone, but that is not an exclusive thing as he has also held talks with Simeone.

Indeed, the Spanish side’s interest ‘leads to caution’ as far as Torino are concerned with them also working on a deal with Torino. Indeed, it is claimed they are set to ‘relaunch’ their interest. 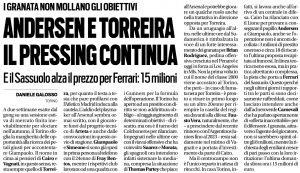 They’ve been working on their offence with Alvaro Morata potentially heading for the exit and Luis Suarez coming in from Barcelona.

They want to ‘settle the middle’, though, including the uncertain situation around Thomas Partey, who Arsenal are known to like and could be included in the potential deal for Torreira.

This is all good news for Arsenal, with it looking like they have two potential routes to get rid of Torreira in the coming weeks, one of which may even get them a player they’ve long desired.