Very interested in Nicolas Pépé, Arsenal have also been looking at Rennes’ Ismaïla Sarr to bolster their attack.

That isn’t a secret in itself, as it’s been reported many times in the past, but Le10 Sport in France want to let everyone know that a bid in January is out of the question.

This particular bit of information won’t come as a shock to anyone, especially since Unai Emery openly admitted all the Gunners could afford were loan deals.

However, what will be of interest to Arsenal fans is what the club’s future plans are, having let Sarr know of their ‘strong interest’ for the end of the season. 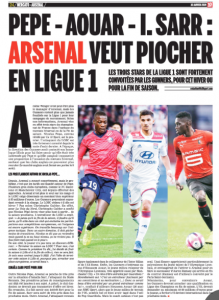 This means the Senegal international is going to be followed ‘very closely’ by the Premier League side during the second half of the campaign, with competition expected to come from AS Roma and Inter once the summer window opens.

Swapping Metz for Rennes in 2017 for a £15.3m fee, the versatile forward has scored nine goals and picked up six assists in 25 appearances for the Ligue 1 side this season.