Juventus are planning a January move for Lyon midfielder Houssem Aouar but will have to ‘watch out’ for Arsenal in the race for the Frenchman.

That’s according to Tuttosport, who say the Italian champions are already planning ahead for the winter transfer window.

The newspaper explains that their plan this summer was to reduce the age of the squad and bring in young talent for the future, something they achieved with signings such as Dejan Kulusevski, Weston McKennie and Federico Chiesa.

That, though, was only Phase 1 of their plan and the second phase will take part from January to June.

At the moment, they are not planning to make their move, but there is ‘no lack of ideas’ at the club, and one of the ‘most concrete’ ones is Aouar.

As you’ll be more than aware, the midfielder was heavily linked with a move to Arsenal for most of the summer and appeared to be going there before the Gunners instead moved for Thomas Partey.

Aouar ultimately ended up staying at Lyon, but Juventus intend to change that moving forward.

They want to improve their midfield and the fact that Fabio Paratici has an excellent relationship with Jean-Michel Aulas and that they recently sent defender Mattia de Sciglio on loan to the club could play in their favour. 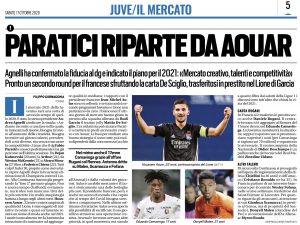 The basics for a deal are ‘all there’ according to Tuttosport but any move will be dependant on the competition, with Arsenal named as one side to ‘watch out for’.

That suggests the Italian giants know their interest has not gone away after their efforts in the summer and the Aouar links to Arsenal may emerge once again should Juventus try and make a move for him.