On Tuesday we covered claims from Spain that Arsenal are one of three clubs keen on Espanyol’s Mario Hermoso.

The 23 year old has had a great season for his club and it’s no surprise to see him picking up interest. Sport reported Arsenal, PSG and Bayern Munich ‘have shown their interest’ in the defender, who has a €40m buyout clause.

Sport included the report again in their Wednesday newspaper, adding a little more about how good the Espanyol player has been this season. They also headline the article ‘It’s raining offers for Hermoso’, but don’t elaborate on what they mean by that.

Now the claims are also being carried by another Spanish newspaper, AS. They don’t credit their information to Sport, and usually would if that’s where they’d picked it up.

All of Arsenal, PSG and Bayern are named again, with the French side being highlighted most. 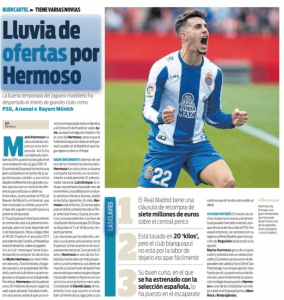 A little dig in the Sport Witness archives shows Arsenal were also linked with Hermoso in November. At that time it was explained the Gunners were one of the clubs ‘insisting’ most for the player.

Marca said Unai Emery was a big fan, with the insinuation it would be him pushing Arsenal interest.

Real Madrid have a repurchase right, and may use that to make a profit on the player themselves.