Arsenal have endured a difficult start to the season, suffering two defeats in the first two matches and have failed to find the back of the net so far.

The Gunners take on Manchester City later this weekend and a loss against the English champions could put Mikel Arteta under intense pressure.

Arsenal’s record at the Etihad hasn’t been great in recent years and taking this and the current form into account, there’s a good chance the north London club may have to wait once again for their first league win of this season.

Faced with this possibility, the Emirates club have started looking for Arteta’s successor and according to Tuttosport, Arsenal have ‘probed’ Antonio Conte’s availability.

The former Chelsea manager is without a job since leaving Inter Milan, days after guiding them to the league success last season. 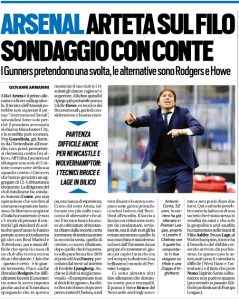 The Italian coach has maintained standards, so much so he turned down the La Liga giants and Spurs, and hence, it would be ‘very difficult’ for him to arrive at club like Arsenal, that’s in ‘great turmoil’.

Therefore, as things stand, Tuttosport say the idea of Conte taking the Arsenal job [if Arteta is sacked] seems ‘fanciful’.