Arsenal midfielder Mateo Guendouzi has made it clear he would not be opposed to leaving the club this summer, and has a host of suitors should he do so.

That’s according to L’Equipe, who report that the youngster has become ‘one of the big losers’ since Mikel Arteta replaced Unai Emery at the club.

Having been a regular under Emery, Guendouzi is now no more than a bit-part player for Arteta, and that’s left him thinking about his future.

The pair do not have a bad relationship per se, but Guendouzi ‘does not play as much as he would like’ having managed just four starts in 12 league games so far.

Guendouzi has had a difficult time accepting this as he sees it as a ‘regression’ and has told his agents that he would prefer a more ‘favourable environment’ to play.

He doesn’t want to ruin his chances of playing for France at the Euros, with it anticipated that the world champions could overhaul their squad for that tournament.

Thus the Arsenal man is looking for a move away, and he knows that his ‘suitors are numerous’.

Several European sides have already asked for information about his situation with Atlético Madrid and Inter Milan at the front of the queue. 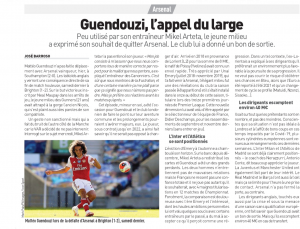 Indeed, Antonio Conte has made It clear he is ‘very fond’ of the midfielder’.

He is not the only one to do so. Juventus and Manchester United have also ‘expressed interest’ while Real Madrid and Barcelona are also ‘keeping an eye on him’.

Arsenal have not closed the door or rejected the idea of selling either. Instead, they have indicated to Guendouzi that they will let him leave, so long as they can make at least €40m from the sale.

That would represent a huge profit on the €8m they paid Lorient in 2018, and they are now waiting to see if anyone will come forward with such a bid.