Arsenal have been given an enormous boost in their pursuit of RB Leipzig’s Dayot Upamecano, with the German side now ready to accept €40m for his signature.

That’s according to SportBild, who say Leipzig have decided to accept €20m less than Upamecano’s €60m asking price this summer to ensure they get something for their man should he leave.

The newspaper explains that it is widely expected Upamecano will leave the club in the coming transfer window, with several sides in Europe all keen on his signature, Arsenal among them.

The German club knew he would attract interest when they signed him in 2017 and installed a €100m release clause in a contract he signed in 2018.

However, that dropped to €60m last summer, and they have decided to reduce it by a further €20m to ensure they can get money for the defender this summer.

Why? Because Upamecano’s contract is running out next season and they fear he will continue at the club for another year, with him able to negotiate a free transfer away as early as January. 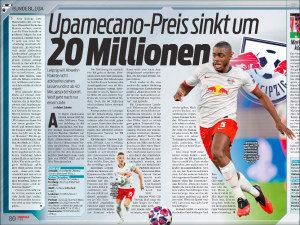 At the moment none of his suitors, like Arsenal, Real Madrid or Bayern Munich are willing to pay his €60m release clause, so the club have decided to offer him cheaper in an attempt to bring his suitors to the table.

Ideally, Leipzig would like to extend Upamecano’s contract and install a new release clause for next summer, say around €40m, but so far the Frenchman has refused to do so.

Thus, they have taken the drastic step of reducing his price in the hope that someone will be willing to pay it and ensure they do not miss out on a significant profit.

This backs up a report from France Football from the end of April stating €40m would be enough to ‘buy the last year of his deal’.