It’s claimed the north London club’s manager knows the attacking midfielder personally (presumably relating to his playing style) and believes he could be key in revitalising Arsenal’s attack.

The Premier League club’s idea is to take the South American on loan so that they can study the possibility of making the transfer permanent in 2021.

It’s stated that Barca, in principle, are only looking for a sale and they believe another loan move would devalue the 27-year-old. Their idea is to sell him before June 30th to balance the books.

However, it’s been repeatedly claimed that a loan is possible, and if there’s no desire from anywhere to sign him permanently then that route looks open. 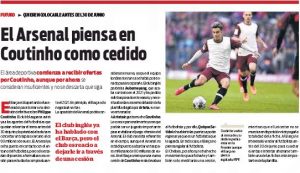 The English club’s idea is only a loan move and they are not considering meeting Barca’s €90m demand for Coutinho.

Compromise is going to be needed.