On April 23rd, we carried a report from Corriere dello Sport, who explained that Sampdoria are ready to open negotiations with potential suitors for Dennis Praet from €20m.

They suffered a 2-1 defeat at the hands of Lazio in their last league tie at home.

According to Tutto Mercato Web, Arsenal’s chief scout was in the attendance at Stadio Luigi Ferraris and he was there especially to watch the 24-year-old in action, who played the full 90 minutes.

It isn’t the first time the Gunners have watched the Belgium midfielder in action as they have scouted him on numerous occasions this season.

The Italian website claims the north London club like Praet and his profile ‘appeals’ to the Premier League outfit. 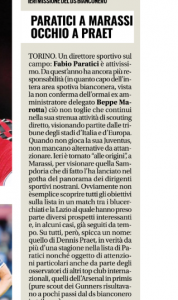 While Corriere dello Sport reported last week that the Serie A outfit will be willing to talk for a minimum fee of €20m, TMW now reports that Sampdoria value their player around €25m.

That figure is achievable for Arsenal.

Meanwhile, Juventus director of football Fabio Paratici was also present to watch Sampdoria’s clash against Lazio and Tutto explains that he was there to watch Praet.

That’s backed up by Turin newspaper Tuttosport, who sound optimistic for Arsenal, saying that among those following the player, Arsenal are ‘in first place’.