Arsenal goalkeeper Bernd Leno has admitted he found the first lockdown in England ‘mentally difficult’ to get through.

Like many, the Gunners number one found himself forced to isolate for over two months, with life in the United Kingdom coming to a shuddering halt as a result of the Coronavirus epidemic.

The government’s decision to enter a national lockdown saw life across the country come to a standstill and footballers were not exempt.

Football across the divisions was suspended indefinitely, with clubs forcing players to isolate for the entirety of the period in an attempt to shield them from the virus.

That is something many footballers found difficult, with several opening up since on how they coped with living and training at home.

Leno has now had his say, admitting he found it tough going mentally but knows he has it easy compared to some.

“The whole life is somehow different, although I have to say that somehow you have already got used to it,” he told BILD.

“At the beginning of the lockdown in the spring, it was quite difficult in England.

“I think my wife and I were only at home for almost nine weeks. While it was already possible to train again in Germany, I was at home.

“Almost nothing worked; it was mentally difficult. I could at least do a little sport in my garden.

“But at least I had my house, many other people were far worse off – such as families with small children who may only have a small apartment and could not send their children to a garden.”

The positive for Leno is that football is now back up and running, despite England having entered another national lockdown.

He’s been a regular for Arsenal this season, establishing himself as number one under Mikel Arteta once again.

While he’s been a regular, his compatriot Mesut Ozil faces an entirely different situation after being frozen out at the Emirates.

The midfielder found himself left out of the Gunners’ squads for the Premier League and Europa League this season, meaning he cannot play until next year at the earliest.

It’s left him playing a cheerleader’s role at best, although it seems it’s not something he is allowing to affect his professionalism.

“Mesut is still part of the team and trains with us,” added Leno.

“He is absolutely professional, both on the field and in the cabin. The club made the decision and did not register him.

“Of course, this is a disappointing situation for him, but Mesut handles it well and is absolutely loyal.” 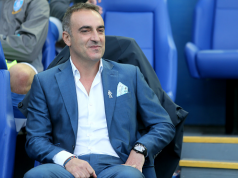 “I was almost idolised” – Manager explains reasons for Sheffield Wednesday...