Barcelona are looking to offload Samuel Umtiti when the transfer window reopens, according to Sport.

It’s claimed the likes of Arsenal, Inter Milan and Napoli have asked about the centre-back.

Mikel Arteta’s side and the Serie A duo considered making offers for the France international, according to the report.

However, all three clubs have now ‘backed down’, and it’s stated the Gunners and the two Italian sides ‘cannot pay’ what he’s currently earning, which is €8m per season.

The Catalan club’s initial idea was to sell him for €50m in the summer, but no clubs are willing to meet their valuation.

Quique Setién’s side are ready to offer discounts to sanction his sale. Sport, however, say all options are ruled out because of the player’s high salary. 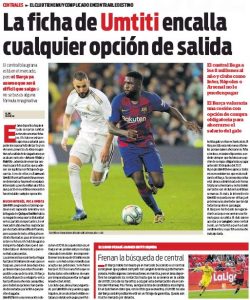 Barca want to get the 26-year-old off their wage list and therefore, they are open to the idea of allowing Umtiti go out on loan next season, provided a mandatory purchase option is included in the deal.

Even though Arsenal and other clubs have asked about the former Lyon man, they ‘cannot pay’ his high wages, which is why they have taken a step back from signing him.