Over the past week or so, multiple reports in Spain have talked about Arsenal and Manchester City looking at Real Madrid’s Isco.

Another Spanish newspaper AS reported on Monday that neither the Gunners nor the Premier League winners have asked Los Blancos about signing the 27-year-old.

Now, Mundo Deportivo states the former Malaga star could leave the 13-time European champions in January due to a lack of regular playing time under Zinedine Zidane.

Isco made only four appearances in the league and whenever provided with an opportunity, he’s struggled to impress his manager.

Unai Emery’s side and City are mentioned in the report and the Catalan newspaper adds these two clubs, along with Juventus, have considered taking Isco for a long time, but none of the three clubs are yet to formalise an offer for the transfer. 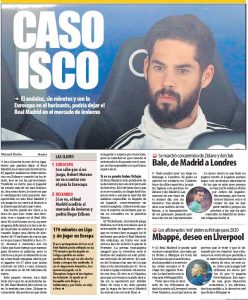 Real Madrid will not make it difficult for Isco to leave, provided they receive an offer of around €70m

It remains to be seen if either Arsenal or Pep Guardiola’s side will make a proposal to sign the player in January.