Home Premier League Arsenal Arsenal ‘ahead of the others’ for potential bargain deal – ‘Dreaming’ of...
SHARE

Arsenal are ‘ahead of the others’ for Napoli star Lorenzo Insigne, but he is more likely to sign a new deal at the Italian club at this point in time.

That’s according to Corriere Dello Sport, who say the ‘wall of ice’ that had separated the player from a renewal has begun to crack.

They explain that a renewal for Insigne is ‘now not so far away’ after Aurelio de Laurentiis decided to meet his agent and offered €5m a year for the next five years.

That has led to the ‘thin wall of ice’ that was separating Insigne from a renewal to start to break and lead to a new deal becoming more and more likely.

The €5m, five-year offer is seen as ‘a bridge’ with which Insigne and Napoli can ‘cross this universe together’ and try to achieve more in the coming years.

Until a deal is signed, though, many of Europe’s big teams are still ‘dreaming’ of signing the player on a free transfer, and Arsenal are said to be one of them. 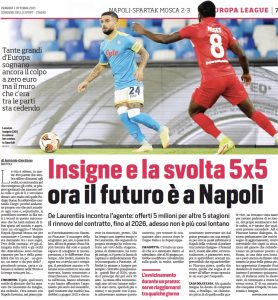 They are ‘ahead of the others’ when it comes to showing an interest, and starting negotiations in January would be as simple as sending an email informing Napoli of their ‘willingness to talk to Lorenzo Insigne’.

At the moment, though, a contract renewal is looking likely and the fact that Insigne recently bought a house close to the city is seen as an indication he’s willing to stay.

That would come as a blow to the likes of Arsenal, who have positioned themselves to try and take advantage of the possible free signing if the Italian decides it’s time to move on.