Manchester City are certainly the European club who’ve been getting most mentions in the Argentine media in the past few days.

The reasons for it are two rumours which were started by the European press, and were quickly fed in the South American country.

The first was about River Plate defender Lucas Martínez Quarta. Reports claimed that Pep Guardiola has the 23-year-old ‘in his plans’.

The rumour had big coverage from the local media, with TNT Sports interviewing the player’s agent to talk about it.

“Until before the quarantine, Chino had many lovers, there were many clubs that had come to see him. I think there will be interested sides again when the picture is clearer. The idea is to agree with River an opportunity for everyone, hopefully the best possible offer will come out.

“In case that doesn’t happen, we will have to get together and see what is most beneficial for everyone. But today we’re imagining, it’s a matter of waiting. He’s one of the players that River have to sell.”

TNT adds that it’s ‘likely’ that River Plate would accept a good offer from Manchester City.

Then it was also said by the English press that Nicolas Otamendi could be used by the Citizens in a swap for Quarta. And the Buenos Aires media loved it.

TNT states Otamendi is a ‘fanatic River Plate supporter’ and ‘said many times’ he’d like to return to the club.

They also point out that the player doesn’t have a place in Pep Guardiola’s team, and say that in case the talks for Quarta start, then Otamendi could be included in an offer.

This is definitely a deal which would make sense for everyone involved, so in case Manchester City haven’t had that idea yet, they better be reading these stories. 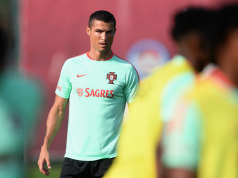 Manchester United presented as interested in signing – Can afford it, agent working hard

Manchester United presented as interested in signing – Can afford it,...