Home Europe From Argentina: Lionel Messi’s father to fly to Europe at the weekend,...
SHARE

It’s needless to say that the Argentine media continues to be full of reports regarding Lionel Messi. There’s now a reason to have a story about literally any step taken by the Barcelona star.

But there are also very interesting claims regarding his future as well. One of them comes from journalist Veronica Brunati, who reports that the player has reached an agreement ‘in numbers’ with Manchester City,

Meanwhile, other outlets take it easier. This is the case of Olé, the biggest sports newspaper in the country, who brings a front page story with the clubs who are fighting for the signing.

Olé still considers Manchester City to be the main contenders. They say the club have many attractive factors such as Pep Guardiola, Sergio Aguero and the Premier League.

However, the Premier League side needs to see if they can spend so much on Messi. The newspaper claims that Pep Guardiola doesn’t want a bad relationship with Barcelona, and therefore the English club would need to pay for the transfer with money and players, instead of fighting them through courts to get the attacker for free. 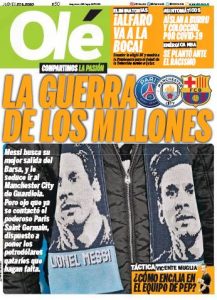 Messi’s father, Jorge Messi, is set to fly to Europe to meet his son at the weekend. And on Monday, Manchester City officials will be in Barcelona to speak to him.

PSG are the other club who are said to be strong in this race. A source told Olé ‘the Qataris are willing to do whatever it takes to stay with Leo’.

Olé doesn’t bring many other arguments on why moving to France would be the best for Messi. The newspaper still puts Manchester City as the number one destination.

Inter Milan and Manchester United also get a discreet mention in the story, but they seem far from being serious contenders for the signing.