Home Premier League From Argentina: Juan Foyth speaks about Tottenham Hotspur, and hopes for next...
SHARE

Back in the last summer, we used to open Argentine newspaper El Dia everyday. The La Plata outlet had been on the money during Tottenham Hotspur’s negotiations to sign Juan Foyth from Estudiantes, and reported the process with very accurate information.

Now one year later, we’re back covering a Foyth story from El Dia, but this time, it’s a full page interview he gives as a Tottenham player.

Currently enjoying his vacations in the city of La Plata, Foyth has spoken about his first season at the London side, as he works to get a more frequent place in the first team.

“In general, it’s good despite not having played so much,” Foyth told El Dia. “I improved in a lot of things football wise, I feel that I’m already adapted and that this year I will have more possibilities of being able to fight for a place in all the competitions that we have ahead of us, and to show all that I can contribute to the team on the pitch.” 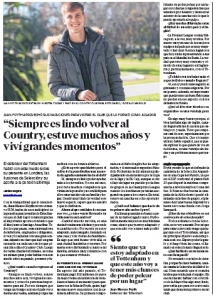 Responding to that same old question about the difference between the football played in Argentina and in England, Foyth said: “The Premier League is very physical but, at the same time, very technical.

“Luckily I am at one of the best teams in the country that is well respected and there are very good players who are representing their country in the World Cup in Russia today. The truth is that I’m very happy and comfortable to be playing in England and, particularly, with Tottenham.”

The defender has also spoken about the physical work he’s been doing since arriving at the Spurs: “Yes, I am going more often to the gym and with more demand. For my position, in addition, it’s important that I can have a good physique to not lose against the rival strikers in that aspect.”

Finally, Foyth talked about the importance of having an Argentine manager at the club: “It’s a very good thing because, although I used to speak some English, when I got there I realised that I knew little or nothing. I had to start almost from scratch, especially for pronunciation. That the staff speaks Spanish, that they can explain what they want to you in your language, it’s an advantage without a doubt, and a problem less that I have.”