A potential Manchester United exit for Marcos Rojo hasn’t really been getting much coverage in Argentina, but Ole give it a push on Thursday.

The country’s main sports daily goes with a headline saying Rojo has a ‘ticket to Liverpool’, which is likely a Beatles reference.

It’s explained that Jose Mourinho plans to bring in at least one central defender before the transfer window closes, and Rojo is therefore getting ready to pack his bags and leave Old Trafford.

Everton are said to have made a €33m offer, and Manchester United are ready to accept that amount and make a profit on the player they signed from Sporting in 2014.

There’s only one obstacle as far as Ole are concerned, and that’s Rojo’s wages. 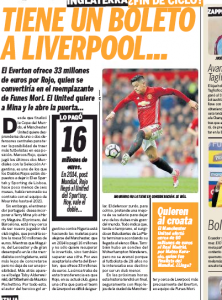 His current salary is ‘difficult to match’ for Everton, and it’s even more complicated because the Argentina international wants a pay rise if he’s to swap clubs.

Despite those issues, Ole believes that ‘everything indicates’ Rojo will come to an agreement with the Merseyside club and therefore leave United this summer.

They even suggest the whole thing could be sorted out quickly.