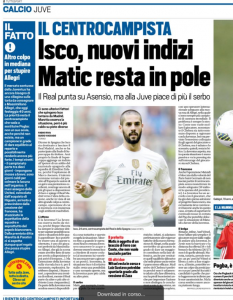 As Juventus dream of bringing Nemanja Matic to the club this summer, the Italian press seem to have mixed feelings about the possibilities.

Tuttosport has an article today saying that the Serbian is on top of Juventus’ list, since he would fit perfectly to Antonio Conte’s tactical system.

They claim Juve are still trying to know if Chelsea want to keep the player or not. The Old Lady are said to be pressing hard as they wait for a response from the player’s entourage.

However, Gianluca Di Marzio has some bad news for the Juve fans. He says the midfielder already had a chat with Antonio Conte and was assured that he’ll have an important role at Chelsea next season.

It means that there’s no chance of him moving this summer, so the Italian club will now have to go for other options. We very much expect Matic to remain in the Juventus rumour mill, they’re not a club to give up easily… and the same can be said of the Turin press.