Aston Villa were reportedly interested in Pione Sisto during the last window, and it was even claimed they agreed a €10m fee with Celta Vigo. They were said to have offered him an annual salary of €1m, which was a significant increase on what he was earning at the Spanish side.

Marca reported in August the winger turned down the opportunity to make the switch to Villa Park.

The Denmark international is represented by his brother and Tuesday’s edition of AS claims Celta’s ‘anger was monumental’ towards the 24-year-old and his agent for rejecting the opportunity to leave.

After placing Sisto on the transfer market, the Spanish side were happy with Aston Villa’s approach.

The decision to stay irritated Celta because they were not only forced to incorporate the player in their plans for this season, but it also blocked them from signing Nolito. 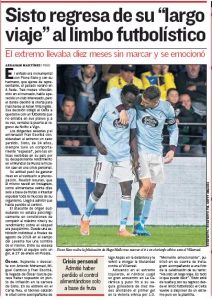 Sisto has started twice for the Spanish club in the last two matches and scored his first goal of the campaign in their 3-1 victory over Villarreal last weekend.

AS states Óscar García’s arrival seems to be a turning point in Sisto’s career.