If there’s one area of the squad West Ham United will probably look at improving in the near future, it’s up front.

They know that relying on Michail Antonio to score and assist aplenty isn’t sustainable, and replacing Sébastien Haller needs to happen sooner rather than later.

Many names have been put forward, with the latest being Jonas Wind from FC Copenhagen, and yet there might be a more experienced and potentially far cheaper option available in Andrea Belotti.

The rumours have already started in England, with the Torino star currently edging towards a free transfer, as his contract with the Serie A club runs out in 2022.

He will be free to chat to clubs about a move in January, which is likely something he will want to explore before making any sort of decision on his future in Italy, and a few clubs are already waiting for the opportunity.

Fiorentina are among them, as are Milan, with La Nazione describing the pair’s candidacy as ‘concrete’, and Torino will do ‘everything to sell Belotti’ in January, wanting to get some compensation if they can. 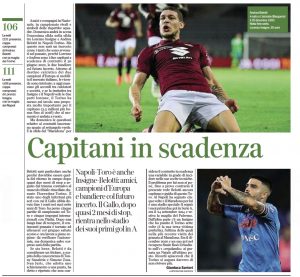 The reason for that is because he doesn’t intend to renew in Turin, as Corriere Torino state the club ‘has put on the table a very important proposal for the captain’, valued at around €3.5m + bonuses/year, ‘which at the moment has failed’.

That certainly opens the door for West Ham, who need a player of his ilk, and could give him both European football and a better wage.

It’s certainly worth pointing out this isn’t the first time the Hammers have been linked with the Italy international, with articles in the Sport Witness dating back to 2016, and were most described as having the ‘best chance’ of signing him back in May.

It didn’t happen last summer, but it certainly could in January if that desire to bring him to London Stadium is still there from David Moyes and co.