West Ham appear to have a £40m budget to spend on a striker during the January window, with the prospect of Marko Arnautovic leaving still present.

There have been multiple claims around the European media about approaches and offers for players, and one of those named has been Andrea Belotti.

The 25 year old has nine goals for Torino so far this season, and in the past he’s been the subject of transfer rumours suggesting a fee of €100m.

Those times have gone and despite the club captain still being an important player, and loved by the fans, he’s not kicked on in the way which would justify such a price. 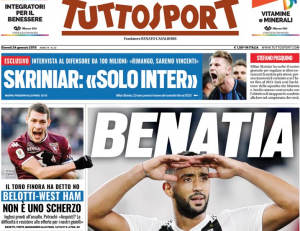 Declaring ‘It’s not a joke’, they say the Hammers are ‘ready to assault’.

As it stands, Torino chairman Urbano Cairo ‘says no’, but it’s made clear that could change. No offer has arrived at €45m or over, at which point it’s suggested things could change, but interest from the English club is described as ‘concrete’.

Cairo loves the player, and he knows full well, as explained by Tuttosport, that selling Belotti and signing Jese on loan from PSG wouldn’t go down at all well with the club’s support.

Simone Zaza was signed last summer and he has one Serie A goal all season, which came in September against Chievo. 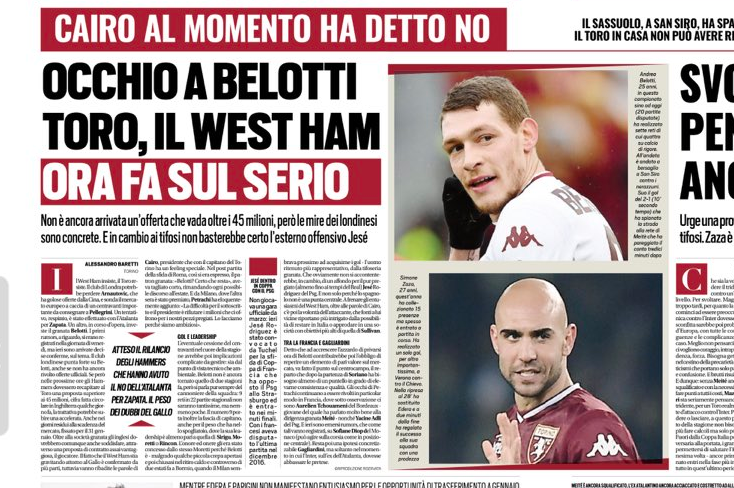 For a Belotti move to happen, West Ham need to offer more than €45m, even if just marginally, and Torino need a replacement which wouldn’t receive disgust from fans.

The player himself would also have to agree, which may be another high hurdle.

There’s only a week left.