Newcastle United’s Allan Saint-Maximin is of interest to AS Roma, if claims coming out of Italy are to be believed.

The Serie A side have confirmed Paulo Fonseca will step down after the end of this season and have already confirmed José Mourinho will replace him compatriot in the Italian capital.

Fonseca’s last big match of his Giallorossi career will be against local rivals Lazio later today. He will be without several first team regulars due to injuries.

Saturday’s edition of Corriere della Sera has a lengthy piece covering Fonseca’s time at Stadio Olimpico and also relayed his comments from the pre-match press conference.

At the end of the report, it’s stated there’s ‘great doubt’ over Borja Mayoral [on loan from Real Madrid] and Edin Džeko’s continuity at the club.

Corriere della Sera then follows it up by saying ‘a couple of pieces of good news and an indiscretion have arrived in Trigoria from abroad.’

The good news is Rick Karsdorp and Ibañez making it to the Netherlands and Brazil’s provisional squad for Euro 2020 and Olympic Games. 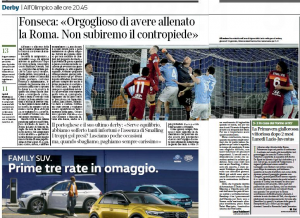 Saint-Maximin then gets a mention, and the Newcastle winger is the subject of interest.

Claims of Roma being keen on signing Steve Bruce’s man, for now, are incredibly thin as that’s about the only information mentioned about the Newcastle player in the report.