While no offers have arrived for Arthur Masuaku just yet, it appears West Ham are keeping an eye out for a new left-back.

According to Gazzetta dello Sport, the Hammers have turned their attention to Bologna’s Adam Masina, whose contract is due to expire next year.

The Serie A club know they could end up being in a precarious position if West Ham turned up with enough money, and that’s why they’re currently working on tying him down for a few more years. 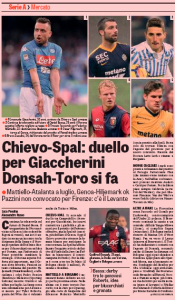 No contract has been signed yet, and with rumours that Masuaku is attracting interest from the likes of Monaco and Roma, the London club could end up with money to burn.

As we’ve said before, it seems unlikely that David Moyes would sanction the sale of the DR Congo international considering how important he’s been to his plans lately, but stranger things have happened in football in the past.

If West Ham can get a good deal on Masina, who, if Gazzetta are to be believed, the Scotsman rates, then why not?