After weeks of speculation, we can say that Manchester City’s interest in São Paulo youngster Éder Militão has finally been confirmed by an official source.

As the player’s father spoke to the Portuguese media on Friday, he wasn’t afraid of saying Pep Guardiola’s side are keen.

Valdo has been interviewed by newspaper A Bola, who were asking him about the chances Porto may have of signing Militão.

Even though the father teased with a Porto move, he couldn’t forget that the Premier League champions are also in the race.

“It’s always good when our children do well in life. He knows there is interest from FC Porto in his services, but also from English clubs, such as Manchester City and others. Newspapers here have been talking about Juventus, but so far nothing has been decided,” Valdo told A Bola.

“Of course, my son is delighted with the chance to play in Portugal. But not the least with the possibility to move to England.” 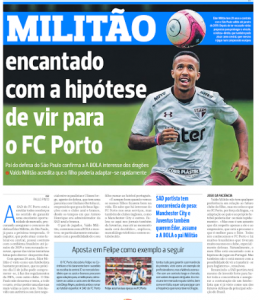 Militão’s contract with São Paulo is expiring in January, and his staff hasn’t been showing any signs that he’ll accept the club’s offer to renew it.

It means that many clubs will be able to sign him for free soon, but considering all this competition, it’s likely that an auction will be happening in the summer.

Manchester City should be well place.